A 27 year old patient suffered an injury from the chain of chainsaws while Stensen’s, duct was cut which caused the uncontrolled swelling of saliva in the facial tissue. Microsurgical reconstruction of the parotid salivary gland duct was performed with microcatether and anastomosis in the area of discontinuity of Stensen’s duct. Microcatether was conducted in the oral cavity and fixed in the region of the papilla of Stensen’s duct, what immediately led to normal salivary flow from glands to oral cavity. After 15 days microcatether was removed from the duct, while a proper function and correct anatomical relations were established with reconstruction of the soft tissue.

Stensen’s duct injury is often artificially caused during facial surgeries and rarely in accidents. However, all authors agree that accidental injuries of these anatomical structures [1], happen to be much more difficult, that usually lead to the complete termination of Stensen’s duct or its continuity. These circumstances result in uncontrolled saliva flow into the soft facial tissues instead of the oral cavity.

The aim of this paper is to explain microsurgical care of Stensen’s duct trauma caused by accidentally termination of continuity of the duct.

A 27 year old patient reported at local Health Care in Uzice, because of facial trauma.

The injury happened during wood cutting with chainsaw, when the chain broke and hit the patient into the face. The patient shortly lost conscious and then asked for help because of massive bleeding from big facial laceration. At HC in Uzice where she was primary taken care of, among bleeding it was also found extensive saliva flow through a wound. She was sent in an ambulance to our clinic where after maxillofacial surgeon and a plastic surgeon examined her, she was put through surgical treatment of injuries [2], while under general endotracheal anesthesia (photo 1). Clinical examination revealed laceration on the face and neck, 10cm long and 1 cm wide, with blood and saliva flow. After wound toilet, except muscle-skin structures, other anatomical structure as well as parotid salivary gland duct were not identified, while the branches of n. facialis were seen in the depth of the tissue [3]. By blunt surgical preparation on the depth of the wound, both ends of the severed salivary gland duct were identified while the branches of n.facialis [4] were verified as intact. 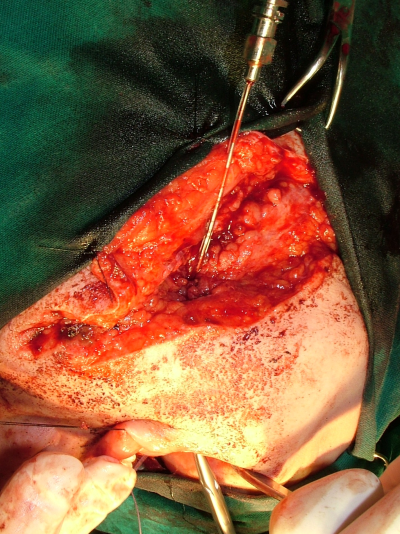 After that, extra oral reconstruction of skin muscle structure [7] of the face and the neck was performed, as well as microsurgical anastomosis of Stensen’s duct that led to correct anatomical relations. Operative and postoperative course went well, wound toilet was performed every two days and stitches were removed after seven days, while microcatheter was removed from Stensen’s duct intraorally after two weeks. On the checkups, patient confirmed that all her functions were restored and anatomical structure [8] were back into the correct position. 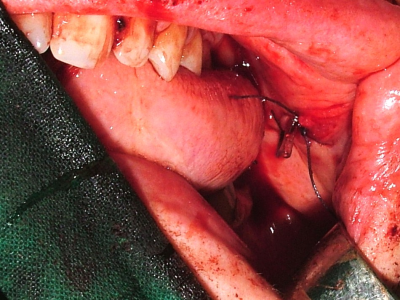 With Stensen’s duct trauma it is possible to remain correct anatomic and functional status only by microsurgical anastomosis of parotid salivary gland duct, because only that allows the normal flow of saliva in the oral cavity.

3. Racic A.J.,Colic M.; Differences in surgical reconstruction after excision of head and neck melanoma and carcinoma; World Congress of Melanoma;pp 118, Paris, France, May 2013.