MEDICAL SECURITY OF A HIGH-RISK PUBLIC

1 Department for Medical Security in the Gendarmerie, Department of Kraljevo,Serbia

2 Department for Medical Security in the Gendarmerie Headquarters in Belgrade,Serbia

3 Faculty of Medicine, University of Nis, Department of Anatomy,University in Niš,Serbia

Introduction: The condition of the sports arenas in Serbia, as well as those in the rest of the world, indicate that sports passion and the desire to win often go beyond the limits of providing decent support to the team, both during and after a competitive event, and often transition into physical confrontation, usually with dire consequences to both the security of the attendants and the infrastructure.

Goal: The main purpose of this paper is to illustrate that medical security of high-risk sporting events is, in fact, a complex task which demands the engagement of various institutions, and cooperation between different departments and organizational units in providing care for a large number of injured individuals.

A football game (FG) played on April 25th, 2015 in Belgrade, between the football clubs (FC) of Red Star and Partizan, was declared a high-risk football game.

High-risk sporting events in Serbia are:

● Sporting events where special circumstances indicate that violence and improper behavior of the spectators may arise (1).

When certain sporting events are declared high-risk events, the security of both the participants of the aforementioned events, as well as the security of the sports facilities, is increased (2). Those types of events are mainly football and basketball games between Red Star and Partizan, together with certain games of the Serbian National Football Team. The duration of a high-risk sporting event is a time span of four hours (h) prior to the start of the game itself, and the time span of four hours upon the completion of the game (2). Police officers (p/o) of particular and special units are trained in performing complex duties while securing sporting events. The Gendarmerie (3) is a special unit of the police which participates in securing public gatherings, concerts, rallies, and festivals. A part of the Gendarmerie is the healthcare service, comprised of medical teams which are sent together with police units, primarily as medical security for p/o, but also as medical security for other participants who might need medical assistance while securing these kinds of gatherings. Our medical security teams represent the first point of contact between visitors of the event and the p/o unit, with emphasis on first aid at the injury site, extraction from the injury site, triage of the injured, treatment of the injuries, preparation for transport, and transport. 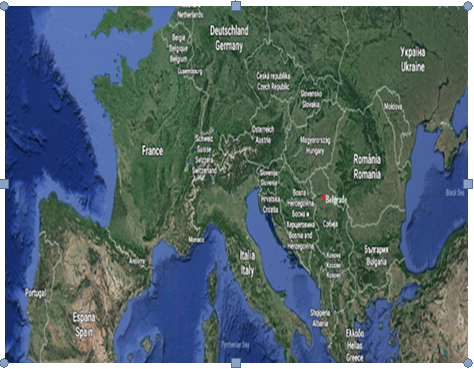 Figure 1. Map showing the location of Serbia on the map of Europe

Prior to the beginning of the game, a detailed security assessment is performed, and security plans serve as means of planning measures and actions to be taken before, during, and after a sporting event. When arriving at the location where the event is to take place, coordination of the duties of our departments is established by setting up a headquarters, which serves as a center of further coordination of engagement of all the medical teams in the field, as well as other structures (members of organizational units of the Ministry of Internal Affairs, Emergency Healthcare Service - EHS, the Fire Department, and the Steward’s Department).

During phase one, upon arrival, there were three available medical teams of the Gendarmerie that immediately set up and connected with each other. The first medical security team was located at the juncture of the southern and western stands, the second at the juncture of southern and eastern stands, and the third at the juncture of northern and eastern stands. Later on, around 4 p.m., we connected with EHS teams, and the medical team of “Anlave” polyclinic, so as to distribute duties of providing medical care to the potentially injured or ill. Our teams were delegated the task of securing the p/o of the Gendarmerie and all the participants in direct contact with those p/o-s, as well as securing the EHS teams and other participants of the event, while “Anlave” polyclinic was responsible for the medical security of the athletes and participants at the stadium

First Partizan suppoters arrived at the stadium at around 3:45 p.m., and are escorted by the police to the southern stands of the stadium. There was a large gathering of Red Star supporters in front of the stadium at 4:50 p.m., and there was a PROBLEM at 5:29 p.m. Partizan supporters showered p/o-s behind the southern stands of the Red Star stadium with handheld torches. A clash of the p/o-s of the Gendarmerie and the supporters’ group called The Forbidden (4). The epilogue of this conflict was eight injured p/o-s of the Gendarmerie, and three injured supporters. The Gendarmerie – five members with light injuries, who were provided with immediate medical care at the injury site, while three members were transferred to the Emergency Room (ER) in Belgrade upon completion of the game, and after being provided with medical care at the stadium. 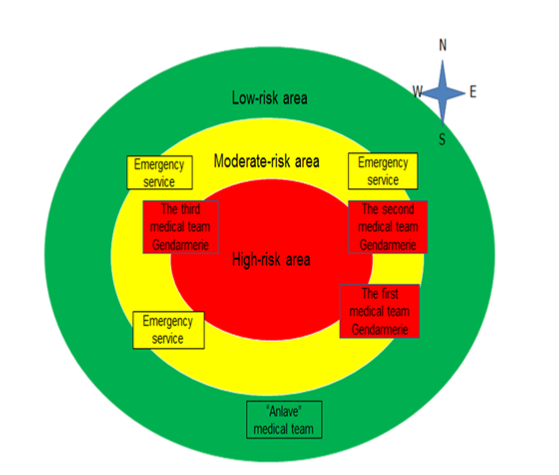 Figure 3. Areas of responsibility and the layout of medical teams in the field

Supporters – two individuals with light injuries (soft tissue of the back and chest), while a supporter with a head injury was handed over to the EHS team. The first medical care team participated during the process of providing care to the injured. Around 6:10 p.m. the riots continued in the stands when Partizan supporters stationed in the eastern stands began their march in large numbers toward the northern stands, in an effort to settle accounts with Red Star supporters. A bigger incident was prevented by the breach of the members of the Gendarmerie into the eastern stands

The epilogue – five members of the Gendarmerie with light injuries, all provided with medical care at the site, by the second medical team. After that, Red Star supporters attempted to jump from the northern to the eastern stands and come into conflict with the Gendarmerie, which had created a buffer zone between the supporters of the two football club supporters. 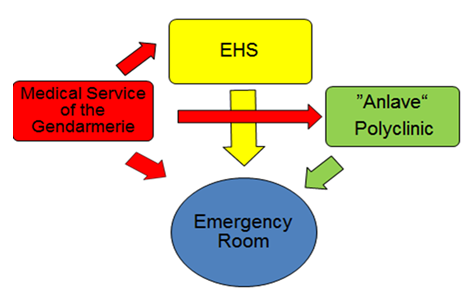 Figure 4. Diagram of the transport of the injured

The epilogue of this conflict – nine p/o-s of the Gendarmerie with light injuries, as well as a number of injured supporters. P/o-s of the Gendarmerie were given medical care by the members of the third medical team that, later on, together with EHS teams from Belgrade, participated in providing medical assistance to the supporters that would be taken over by the EHS. Since another cordon of the Gendarmerie was set up, the situation in the northern stands settled down at around 6:30 p.m. and, after the police had taken over the northern stands, the game could begin at 6:42 p.m. During the further course of the game, at the 63rd minute, the referee was forced to interrupt the game because the “Gravediggers” from the eastern stands threw handheld torches on the running track and the pitch. Again, an intervention of the Gendarmerie and the Fire Department followed. The epilogue of the conflict – no injured p/o-s of the Gendarmerie or members of the Fire Department, with three injured supporters reporting for medical assistance to our teams. One inebriated participant approached our third medical team, who handed him over to “Anlave” polyclinic after extracting him from the stands; another participant, complaining about heart problems, was handed over to the first medical team to be transferred to the ER; a third participant was exhibiting blood pressure problems and was handed over to the second medical team for medical assistance. During the remainder of the game, there were no participants who asked for help, and upon the ending of the game at 8:40 p.m. the first medical team, having come back from the ER transported three p/o-s to the ER for further treatment. The two other teams went back to the starting position and remained with the unit – phase three, which usually ends at 11p.m., after the supporters disband.

Violence at sports competitions has become a global phenomenon, most prominently at football games, and the location with the highest risk is the stands. The consequences of violent behavior can be witnessed by looking at the large number of injured p/o-s and other participants, material damage caused by violent behavior, and sporting event interruption. The question of security arises only when unexpected circumstances occur. There are almost no comments when an event transpires without any problems. The epilogue of the engagement of the medical teams of the Gendarmerie at the football game was – providing medical care to 22 p/o-s of the Gendarmerie and 6 civilians. 19 p/o-s of the Gendarmerie were given medical assistance at the site, while 3 p/o-s were transported to the ER in Belgrade for further treatment, after being provided with primary medical assistance. Civilians – 3 civilians were given medical assistance on the site, one was handed over to the EHS team, the other to “Anlave” polyclinic, and the third one was transported to the ER. During field work we employed START triage (“Simple Triage and Rapid Treatment”), as one of the most commonly employed forms of the classification of the injured in mass accidents, with a large number of the injured located in a small area. 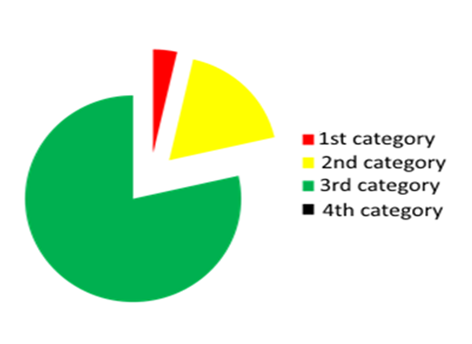 Good sides of our approach:

● Our teams are trained to work in such an environment

● Joint engagement of our teams, as well as EHS and “Anlave” teams

The problems our teams faced during the engagement:

● A large number of injured p/o-s of the Gendarmerie

● A possibility for our teams to be injured when providing medical care to the p/o-s of the Gendarmerie and other participants, at the hands of the “hooligans” (5)

● The transport of the injured by ambulance to the ER in Belgrade, due to the situation at hand

It is, therefore, needed to perform an analysis of the event that transpired, beginning with the preparation, the organizational structure, the event itself, the results, the feedback received from the spectators, participants and staff, in order to gain as much experience as possible before similar future events.

From a medical viewpoint, it is of greatest importance for the organizer of a sports competition to have a large number of trained medical teams which would properly and timely administer first aid on the site. Teamwork, training, and adequate medical equipment are essential for the teams that provide medical care. In accordance with the international standards, and as part of the training process, the medical staff providing medical care must undergo the BLS (Basic Life Support) and the ATLS (Advanced Trauma Life Support) (6) training programmes. The improvement of prevention, preparation and readiness to react  in the aforementioned situations should be constant and unavoidable, and all social structures should become involved in these attempts. In order for all the medical services to act efficiently, it is necessary to plan individual potential incidents and practice  incessantly.

1. The Law on the Prevention of Violence and Misbehavior at Sports Events, 2015

2. Article 2 – The Law on the Prevention of Vio­lence and Misbehavior on Sports Events, 2015

Department for Medical Security in the Gendarmerie,