FALSE EMERGENCY MEDICAL CALLS IN THE

INTRODUCTION: In the medical literature, we could not find papers that dealt with the assessment and analysis of false calls made to emergency medical services. Little is known about how and why people disturb this part of the Medical System as well as the consequences which could happen.

OBJECTIVE: This study investigates how many such calls have been made in the four-month period and their 24h distribution, so as to show the prevalence of fake calls in the work of the emergency medical service.

MATERIAL AND METHOD: A retrospective analysis of the field protocol and audio transcripts for the period from October 1st, 2015 to January 31st 2016.

RESULTS: Total number of registered calls for this period was 11,976. We found that 39 calls could not be used for technical reasons. Of the 11853 calls, 123 were false. That is only 1.027 % of false calls. On average, there were 30.2 false calls each month, or 1 false call in 24 hours. While observing the calling time in relation to the period from 00.00 to 24.00h, it can be noticed that the frequency was higher during the afternoon and night hours. There were no false calls in the early morning hours.

CONCLUSION: False calls, due to their presence, are not very burdening for the work of the emergency medical service, but they can be very important for an individual who needs emergency medical care, which may be untimely and late, due to the team dealing with a false call. Therefore, it is necessary to influence on population through a public campaign in order to reduce the number of these calls and inform the public about the seriousness and severity of its consequences.

The emergency medical service (EMS) in Serbia functions so that everyone who needs medical help can call the number 194. The calls are taken by a doctor on duty. Based on the conversation, the doctor assesses whether there is a need to send a team, consisting of a doctor, a nurse/medical technician and a driver. In our country, except in few emergency services, there is no protocol and the assessment is exclusively based on the experience and skills of conducting conversation with the caller. The doctor can also give advice or redirect the patient to whom to contact further. In everyday work, there are calls which purpose is not to ask for help, but to disturb the Service, resulting with blocking that line and preventing others from receiving help. Under the term "False calls", we have classified calls that requested urgent medical help for some person, and upon arrival, the team had found some of the following situations: there was no such person on this address; this person exists but he/she denied the call; no one was present on the address or there was a non-existent house or an apartment number. Teams are most often called for false traffic accidents, injuries, deaths, childbirth. Improper use of EMS can have serious consequences. Unnecessary engagement of the team and its unavailability to another patient increases the reaction time, which in some cases can be crucial for that person's survival. According to our assessment, the callers are often children, teenagers, mentally ill people. The inappropriate use of EMS drains health system resources and undermines the paramedic’s motivation.1,2,3

This study investigates how many false calls have been received by the Emergency Medical Service Niš.

A retrospective analysis of the field protocol and audio transcripts for the period from October 1st, 2015 to January 31st, 2016. This research was approved by the Ethics Committee of the EMS Nis.

Results: The total number of the registered calls was 11,976. Of that number, 39 calls could not be used because of the technical problems. Of the remaining number of calls, 123 were false calls. While observing the calling time in relation to the period from 00.00 to 24.00h, it can be noticed that the frequency was higher during the afternoon and night hours. There were no false calls in the early morning hours. All results are presented in graphics 1 and 2, and table 1. 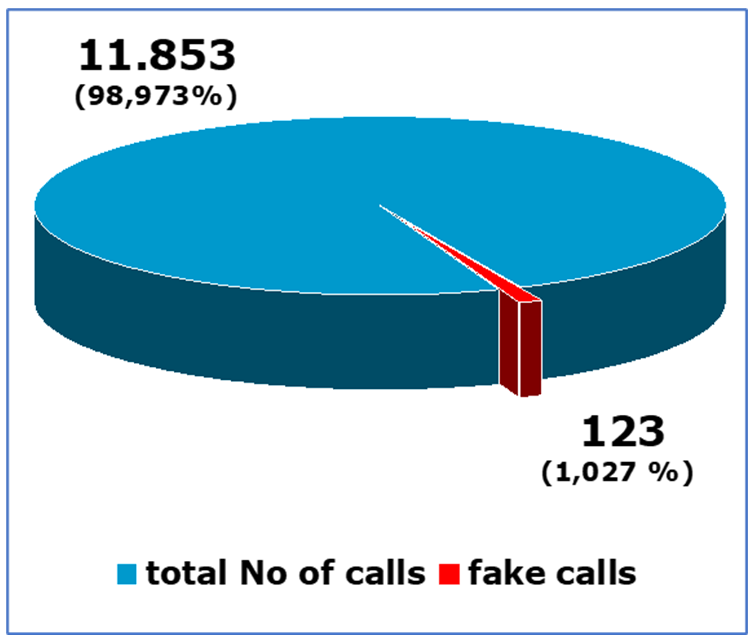 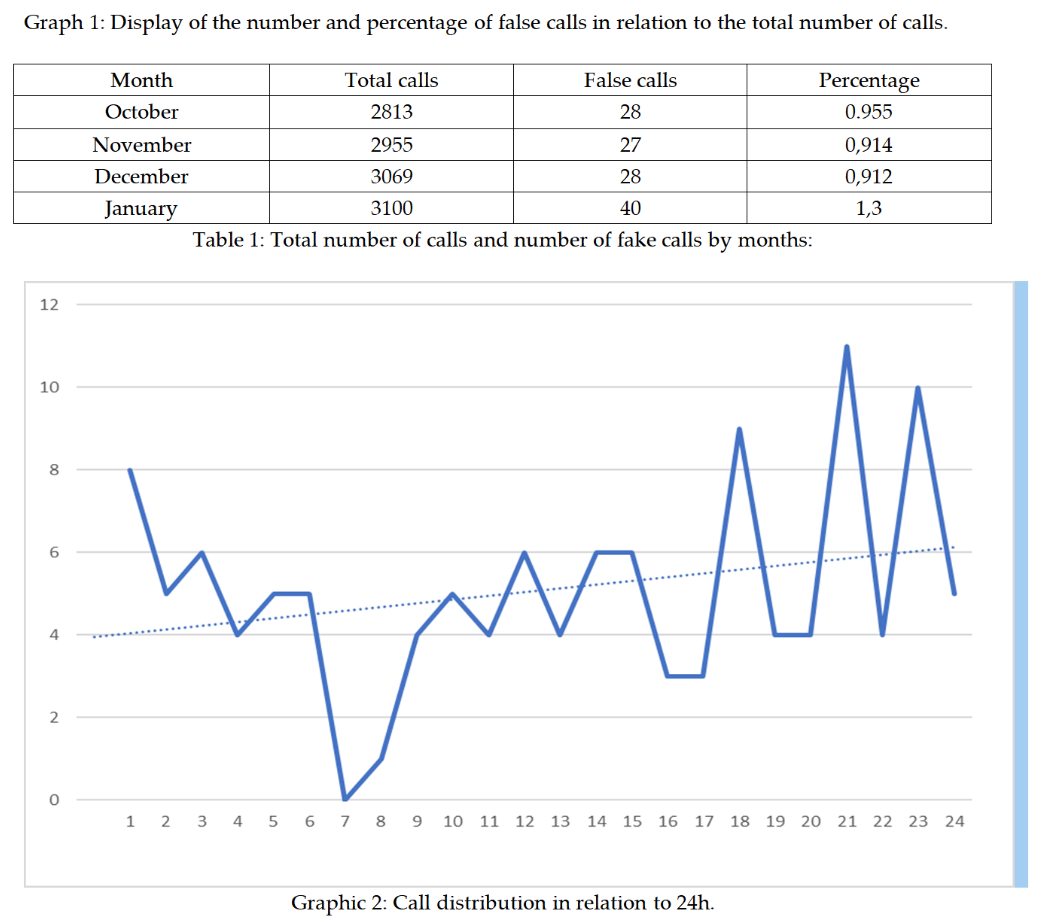 Graph 1: Display of the number and percentage of false calls in relation to the total number of calls.

Table 1: Total number of calls and number of fake calls by months:

For the assessment of the efficiency of the health system and the improvement of its quality and reduction of the misuse of the EMS, we require a clear assessment and definition of the existing problems as well as to determine measures that can provide a certain professional level in the work of the emergency medical care. Misuse of the emergency services is difficult to define, and often occurs in unclear circumstances or possible misunderstandings. By listening to the tapes and inspecting the call protocols based on the data we received directly or indirectly, certain characteristics of the caller stand out: age, not knowing EMS work principles, health care system deficiencies and the low level of health education of the population.

Age: We have noticed that children and teenagers often do not understand the nature and seriousness of the call made to EMS. The use of alcohol and stimulants additionally leads to the misunderstanding of the situation, making a call to the EMS perceived as a joke.

Not knowing EMS work principles: Passers-by, neighbors and other people sometimes abuse the emergency system because they do not know how to assess the situation, primarily because they do not know who to call, so they call the EMS. Very often, they call because of a homeless person, a beggar, worried about his condition or upset by their presence in their environment, even though there are no real health problems with the patient himself. Also, people call for people with dementia who do not have to be hospitalized, but the ones who take care of them are worried and are not sure what is happening to them and what the further procedures are.

Health care system deficiencies: It lies precisely in the fact that there is no possibility of tracking the call and obtaining information about the owner of the phone. Moreover, in Serbia, there is no legislation that allows the punishment of people who falsely report the call. Some countries have enabled the EMS to get the correct geo-positioning location when the patient is calling, which reduces the time of the call, more precisely, there is no need to further clarify the location of the event. We believe this is a problem that solves the issue of false calls and by passing the effective regulations, the easiest way to solve and improve the functioning of the EMS.

Low level of health education of the population: Unfortunately, we have to conclude that in our country there is no health education as a subject in both primary and secondary schools. Knowledge and understanding of the importance of caring for one's own and others' health is left to the family's personal interest. As the HMP EMS is only thought of when there is a need for the activation of this system, broad public campaigns are necessary in order to raise awareness of the importance and significance of the proper use of the EMS system.

This study is, to our knowledge, the first analysis of false calls and misuse of the EMS. Given that EMS teams are at the forefront of the health care system, assessing adequate use of EMS is focused on the best patient care. We must work on a daily assessment of inadequate use of the EMS as well as ways to prevent that misuse. The leading idea is to provide important data to health service administrators and create adequate standards and procedures with the legal basis.

Our findings on false calls in the daily work of the EMS complement several studies that examined the decision to call the EMS. The callers describe their experience in these situations as "unbearable" and experience feelings of anxiety before the call.4 The study by Booker et al. on the patients who called an ambulance, revealed a lack of understanding of the health system options and previous negative experiences asking for help influencing the decision to call again.5

Limitations: The examiners were not able to obtain data on persons who called the EMS as well as to discuss the reasons for making such calls to the EMS.

Conclusion: False calls, due to their presence, are not very burdensome for the work of the EMS, but they can be very important for an individual who needs emergency medical care, and which may be untimely and late, due to the team dealing with a false call. Therefore, it is necessary to influence on the population through a public campaign in order to reduce the number of these calls and inform the public about the seriousness and severity of its consequences. The most important thing is the adoption of legal regulations for calling of the EMS, and the creation of clear guidelines for receiving the emergency medical calls.