INTRODUCTION: The aim of this study was to analyze the frequency of prehospital acute cardiac arrest, demographic characteristics and outcomes of patients resuscitated by the team of the Emergency Medical Service (EMS) of Jagodina during 2016.

MATERIAL AND METHODS: Retrospective analysis based on data obtained by inspecting the protocols of the EMS of Jagodina in the period from 01.01.2016. until 31.12.2016.

RESULTS: During 2016, the EMS Jagodina team resuscitated a total of 22 patients with acute cardiac arrest, of which 12 men (54.54%), 9 women (40.9%) and one child aged 6 years (4.54%) who was also the youngest patient while the oldest was 90 years old. Cardiopulmonary resuscitation measures (CPR) were most often applied at home (72.27%), while 5 (22.72%) patients were resuscitated during transport to the Emergency Department of the General Hospital Jagodina. The months with the highest number of CPRs are April and December. Ventricular fibrillation (VF) and pulseless ventricular tachycardia (VT) were the initial rhythm found in 7 (31.82%) patients, asystole in 13 patients (39.09%), while pulseless electrical activity (PEA) was noted in 2 (9.09%) . In 13 (59.09%) patients a ventilation mask and balloon were used, endotracheal intubation was used in 8 patients (36.36%), laryngeal mask and Igel in 1 patient (4.54%) were used as a measure of airway protection. Basic life support measures (BLS) were started in only 3 patients (13.64%) before the arrival of the emergency medical team. Spontaneous circulation (ROSC) recurrence occurred in 3 (13.64%) patients.

CONCLUSION: Since most acute cardiac arrests occur at home, it is necessary to educate the population for early recognition of sudden cardiac arrest by eyewitnesses, adequate calling of number 194 and providing basic life support measures until the ambulance arrives.

Acute cardiac arrest is one of the most urgent, as well as the most dramatic situations that doctors encounter in everyday practice. By definition, it represents a sudden and unexpected cessation of blood circulation caused by a functional cessation of heart function. [1] Cardiopulmonary resuscitation is a set of emergency measures and procedures performed in patients with cardiac and respiratory arrest, with the aim of restoring circulation and respiration. The set of actions that connect the victims of sudden cardiac arrest with survival, are called the chain of survival. [2] The first link in the chain is early recognition and calling for an ambulance, the second link is early cardiopulmonary resuscitation by eyewitnesses, the third link – early defibrillation, and the fourth early application of advanced life support (ALS) measures and post-resuscitation care. [2,3] Data from the current world literature indicate that only 9.6% of patients survive until discharge from the hospital. Every year, 300,000 Americans experience acute cardiac arrest outside the hospital, and a total of 700,000 experience it. The survival rate is 6.4%. [4]

AIM OF THE WORK

The aim of this paper is to analyze the frequency of prehospital acute cardiac arrest, demographic characteristics and outcomes in patients resuscitated by the team of the EMS of Jagodina during 2016.

A retrospective analysis of the data obtained by inspecting the protocols of the EMS Jagodina was performed in the period from 1.1.2016. to 31.12.2016. The work was done according to the work of the colleagues from EMS Health center Subotica, published in ABC journal in 2014. The obtained data are shown in tables and graphs.

The highest number of cardiopulmonary resuscitations was recorded in April and December (4 patients 18.18%), and the lowest in January and October when there were none. (Chart 3).

Chart 1: Number of resuscitated by gender

Chart 2: Patients by age groups in %

BLS measures before the arrival of the emergency medical team, were started in only 3 (13.64%) persons. ROSC occurred in 3 (13.64%) patients. Two patients who developed ROSC were patients with an initial shock rhythm and one patient had asystole when the diagnosis was foreign body obstruction. Chart 3: Distribution of patients by months 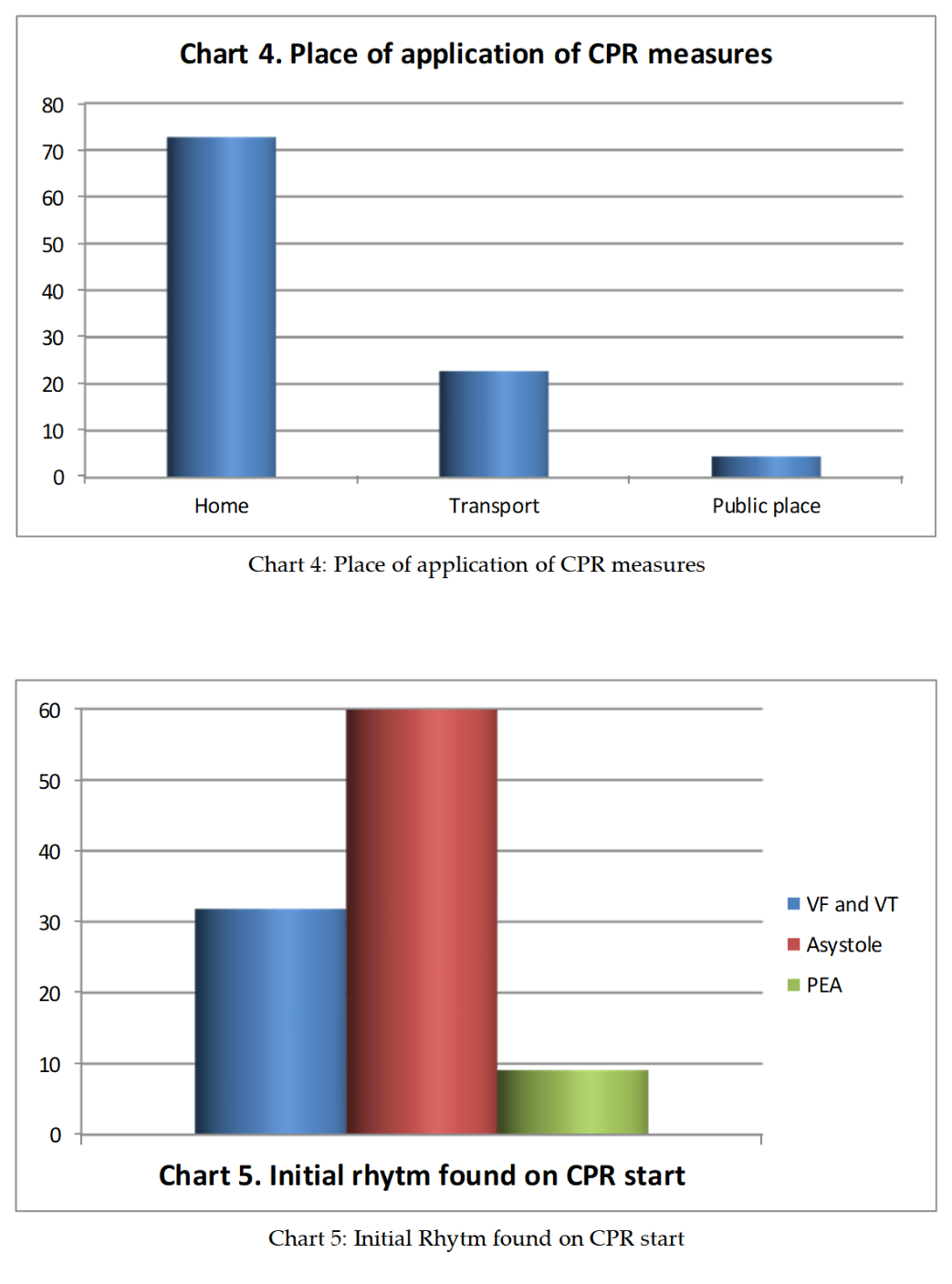 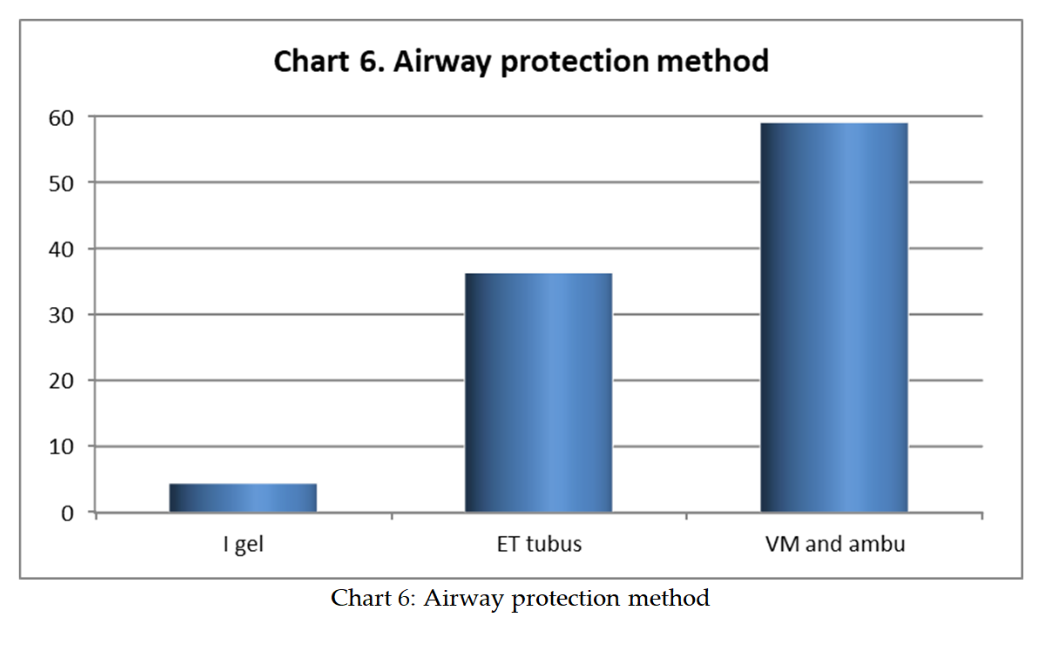 The Jagodina EMS covers a territory of 470 km2, ie 71195 inhabitants, which are the data of the Republic Bureau of Statistics from 2011. [5] One medical team with a fully equipped ambulance is located on the territory of the city itself and practically only that team supplies the needs of the entire territory of the city. One of the most important factors influencing the success of cardiopulmonary resuscitation is the time that elapses from the onset of acute cardiac arrest to the initiation of CPR measures. It is the very first link in the survival chain, early recognition and calling emergency services, that often fails. Our reaction time prolongs the mixing of emergency telephone numbers (firefighters, police and ambulances), then the unwillingness to answer questions asked by the ambulance dispatcher, inadequate calls stating that the patient is unconscious or not breathing, although in reality that is not the case. Road congestion, leaks of ambulances with rotating lights on, vague instructions about the place where the acute cardiac arrest occurred are common problems faced by the team of our service. The obtained data from only 13.64% of the started BLS measures before the arrival of the medical teams is worrying. There are several reasons for that. On the one hand, there is a need for people to help in such situations, and on the other hand, there is very little knowledge about the correct implementation of the CPR method, which the field teams were convinced of, and also the fact that health care is not familiar with the proper implementation of resuscitation measures, they do not encounter it in their daily work. According to some world research, for every 30 people on whom eyewitnesses apply BLS, one additional life is saved. [6] It is believed that in an era of social networks and widespread internet availability, BLS measures should be known to a large number of people. A good step in the education of the general population is certainly the mandatory training of candidates for taking the driving test in first aid, mandatory training in schools, mass trainings, educational videos.

The ratio of the number of resuscitated males and females is in line with world data. The ratio of shockable / non-shockable initial rhythm disturbances indicates that the reaction time for the ambulance crew was longer than 4 minutes, and none of the eyewitnesses applied the CPR measures. It is believed that most victims have VF or VT without a pulse at the time of collapse, but by the time the first ECG is recorded, rhythm worsened to asystole. [7] Of the 5 patients who experienced acute cardiac arrest in an ambulance, a return to spontaneous circulation occurred in 3 (60%). Since 2013, the EMS Jagodina has also had access to the Igel, which is especially important because the structure of 13 employed doctors consists of one emergency medicine specialist, one doctor specializing in emergency medicine, three general medicine specialists and other general practitioners. The large number of patients with asystole as the initial rhythm is a consequence on the one hand, the late arrival of the EMS team, non-recognition of the situation by EMS callers and lack of EMS staff structure and on the other hand great ignorance of BLS by ordinary people.

Since most acute heart failure occurs at home, it is necessary to educate the population for early recognition of sudden cardiac arrest by eyewitnesses, adequate calling of number 194 and providing BLS measures until the emergency medical team arrives. We should also work on the possibilities of training and specialization of doctors who work in the EMS, because the quality of providing emergency medical care depends on their training.